How to Train Your Dragon Wiki
Register
Don't have an account?
Sign In
Advertisement
in: Dragons, Dragon Species from the Books, The Incomplete Book of Dragons,
and 6 more

Come in all sizes
Can grow to about the size of a lion. 7

The usual fangs and talons... 7

Can squeeze themselves so thin they are barely visible... 10

The Raptortongue is a species of dragon first seen in How to Ride a Dragon's Storm. Raptortongues are Mountain Dragons primarily inhabiting the Gorge of the Thunderbolt of Thor and the Murderous Mountains.

Raptortongues have a flattened body with a pair of wings somewhat reminiscent of a manta ray's 'wings'. Depictions of them show a brown body color or brown and green.

Other than the standard fire breath, Raptortongues are one of only two dragons able to flatten themselves completely, the other being the Riproarer. Their general appearance is rather flat anyway, but they can flatten further and even fit under a closed door.

Though a bit wild, they are trained by Vikings as Spy Dragons, due to their ability to flatten themselves.

Hiccup, Fishlegs, and Camicazi are captured by Raptortongues during the Inter-Tribal Swimming Race, then delivered to Norbert the Nutjob's ship The American Dream 2. They are Madguts the Murderous' secret weapons, as suggested by the fact they are found in Murderous Mountains.

Raptortongues are also mentioned in How to Break a Dragon's Heart, when Humongously Hotshot the Hero slips quietly past them in the Gorge of the Thunderbolt of Thor into Uglithug lands to kidnap Princess Tantrum.

This reference book depicts and describes the Raptortongue. 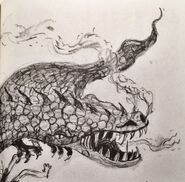