Healing properties of scales and saliva

The Quiverpain egg has the appearance of jaggedly spiky ice in a sea green color. The tips of the 'ice crystals' are a reddish-purple color.

The Quiverpain dragon has the general physical appearance of a standard Shivertooth. However it varies from the standard ice blue colors. Instead Quiverpains are a sea foam green color with royal purple vertical stripes along their body, as well as on their spines and wing tips.

The Quiverpain, similar to a standard Shivertooth, is able to fire ice and snow from its mouth. This ejecta does contain some of the dragon's saliva mixed in.

Though it is unknown if there is direct benefit to the dragon itself, the Quiverpain's saliva and scales have healing properties for Humans. These parts are useful in the treatment of sore throats.

Gobber portrays the Quiverpain as an intelligent and crafty dragon. In order to get a saliva sample from a wild Quiverpain, Gobber approaches the dragon in a friendly manner. Simply by having Grump fire on the ground, the wild dragon understands that he was asking it to do the same.

In addition to being 'tricky', Quiverpains also appear to be at least somewhat solitary dragons, building nests for only themselves. They don't seem to be particularly territorial with other dragon species, though it is unknown how aggressive they might be with others of their own kind. 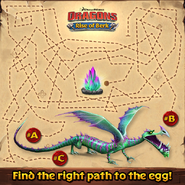