How to Train Your Dragon Wiki
Register
Don't have an account?
Sign In
Advertisement
in: Dragons, Dragon Species from the Books, Sea Dragon Class,
and 4 more

About the size of a Panther

The Polar Serpent is a species of Sea Dragon that lives in the northern polar regions of the world. They appear in How to Ride a Dragon's Storm.

The Polar-Serpent is white with faint grey markings and is about the size of a panther. Their most notable physical trait is the long narwhal-like tusk sprouting from the end of their muzzle.

They have excellent sight, hearing, and sense of smell. This frosty dragon has a large harpoon-like horn that it uses to impale its prey.

They shoot thunderbolts of flame from their mouths.

Like seals, Polar Serpents like basking on icebergs, but unlike seals, Polar Serpents have a carnivorous streak. These pack dragons sit upon these icebergs like statues scanning their environment and, when one spots prey, they all dive in for a bite. They windsurf across the ice on their bellies using their wings and legs to steer and pick up speed, getting quite fast. They eat polar bears, seals, penguins, fish, and even people. Polar Serpents also use their horn for hunting: they saw holes in the ice with it and wait for their surprised prey to fall into their open jaws below.

Like most Sea Dragons, Polar Serpents joined the dragon side of the Dragon Rebellion during the Second Dragon War.

Polar Serpents appear in this book as Hiccup is kidnapped aboard The American Dream 2 which is sailing through the Arctic on its way to the 'mythical' land of America. He is chased by the Serpents and accidentally awakens a Leviathorgan.

Polar Serpents are mentioned in this Reference Book and appear in the Dragon Key at the back of the book. 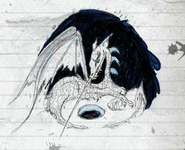 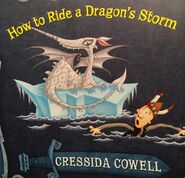