How to Train Your Dragon Wiki
Register
Don't have an account?
Sign In
Advertisement
in: Locations, Franchise Locations, Bodies of Water, Dragons: Defenders of Berk Comics

Pitfall Cove is a location seen in the Defenders of Berk comic, "The Endless Night", and is located on the coastline of Berk.

Pitfall Cove is one of many locations along Berk's shoreline in which ships can anchor and sailors disembark.

During the events of "The Endless Night", The Thunderhead Tribe kidnaps several Hairy Hooligan tribesmen, while the rest of Berk is under a mysterious "spell" of Skuld the Sorceress. The Thunderhead ships are anchored secretly in Pitfall Cove, and are discovered by the Dragon Riders. 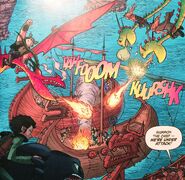