Isle of Berk and surrounding areas

Learn Piracy and other Viking skills

The Pirate Training Program is an educational system for the Hairy Hooligan Tribe to teach their young boys skills to be a full-fledged Viking. It is currently lead by Gobber the Belch.

After successfully completing the Dragon Initiation Program to be acknowledged as tribe members, the children of the Hairy Hooligan Tribe must next complete four years of training to be considered full Viking warriors. Currently their education is overseen by Gobber the Belch. The program is very hands on and utilizes exercises and learning in the field, though there are mentions of workbooks and other texts. Report cards are sent to the parents of the students. 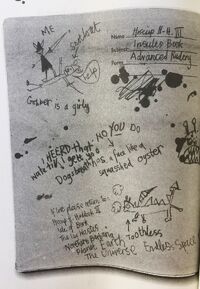 Rudery is the art of hurling insults at someone. Gobber teaches Advanced Rudery in the Great Hall. Lessons include Rudery Battles in which two students insult each other. Class also require the Viking Novice to have an Insults Book.

Burping was one of Stoick the Vast's favorite studies when he was growing up.

This class teaches Vikings how to interact with foreigners, namely, yelling and scaring them.

Frightening Foreigner classes are sometimes taught in the Great Hall.

A specific lesson within the Frightening Foreigners class is 'Taking Money with Menaces'. Students roll play to learn concepts.

These lessons are taught by Rugged Rita. Hammerthrowing was one of Stoick the Vast's favorite studies when he was in training.

During the summer, students are paired with young Riding Dragons, who are able to carry a rider's weight, but not yet fly with that weight. During Herding-Reindeer-on-Dragonback lessons, the students are to learn how to ride a dragon on the ground while also directing their Hunting Dragons. Further, they must direct both creatures to herd - not chase - a large group of reindeer. This typically takes place in the Huge Hill area of Berk.

Herding Sheep lessons use skills from Dragon Training. The student must direct their Hunting Dragon to round up sheep and direct them to a predetermined location. This lesson occurs before the student can learn Herding-Reindeer-on-Dragonback. One difficulty faced by the students is overcoming any prey drive exhibited by their Hunting Dragon. Toothless has a strong instinct to chase, and ended up sending the sheep into the toilets, as mentioned in How to Twist a Dragon's Tale.

During Winters, the Pirate Training Program Head takes the students to Mount Villainy to shoot Semi-Spotted Snowpeckers while skiing down the mountain. It is described as being"really quite a complicated skill."

The more birds killed the higher esteem a student receives.

The novices are required to construct their own small ship. Students are paired off and must design and build the ship using woodworking skills. The boat will be used in future lessons such as Board-an-Enemy-Ship lessons. 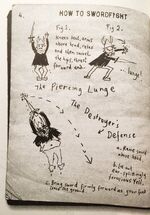 Sword-fighting is essential for a Viking Warrior, and there are many makes and models of swords for the novice and adult Viking alike. There are even textbooks on sword fighting techniques. Lessons are taught using the right hand, whereas those who are naturally left-handed must find this out on their own. 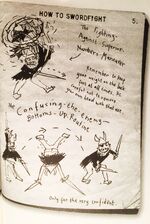 Some specialized moves include: 'The Piercing Lunge', 'The Destroyer's Defense', the 'Fighting-Against-Superior-Numbers' maneuver, 'Confusing-the-Enemy-Bottoms-Up-Routine', 'Grimbeard's Grapple', 'Flashcut Lunge', and 'Deathwatch Parry'. Some techniques are more difficult than others.

These lessons are divided by ability. The 'Beginners Only' level is introduced at the beginning of How to Be a Pirate. The novices are to practice sword-fighting with wooden covers over their sword blades, while on a ship at sea.

Hiccup's Timetable of Lessons in the first year (Book 2)

Fishlegs' Guide on How NOT to Ski

Heroic Swordfighting Tips
Add a photo to this gallery

Retrieved from "https://howtotrainyourdragon.fandom.com/wiki/Pirate_Training_Program?oldid=388836"
Community content is available under CC-BY-SA unless otherwise noted.