Pincher is a male Deadly Nadder appearing in the game, Dragons: Titan Uprising.

Pincher's body color is a combination of cyan, orange, and yellow with a light beige underbelly; his main body color is orange with purple coloring on his wing edges and on some of his scales. His eyes, as well as the edges of his crown of spikes, are yellow. The small hooks at the end of his wing joints and claws on his feet are woody-brown. 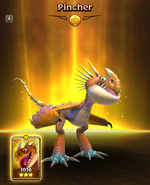 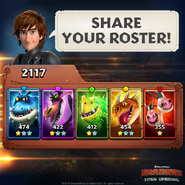 Retrieved from "https://howtotrainyourdragon.fandom.com/wiki/Pincher?oldid=570588"
Community content is available under CC-BY-SA unless otherwise noted.