Phantom is a Changewing introduced in the Riders of Berk comics in the issue, "The Legend of Ragnarok". She later appears in the game, Dragons: Rise of Berk.

Hiccup Horrendous Haddock III and the Dragon Riders were attempting to train Phantom. However, Phantom was very violent and would shoot acid at everyone. She also repeatedly hypnotized Hiccup for a short while, which slowed down the training. Astrid had Toothless, Stormfly, and Barf and Belch corral Phantom back into her cage.

Hiccup later came back with Toothless, thinking that the large group of people and dragons was why Phantom would not respond to being trained. Hiccup was just making progress, when a horn blared, heralding the approach of a massive Purple Death.

After a long fought battle with the giant dragon, Hiccup came up with the idea to train Phantom to help in the battle. Hiccup succeeded in training Phantom, and later used her to hypnotize the Purple Death and put it back to sleep. She later had a slight argument with Toothless over who Hiccup liked more, but Hiccup told Toothless that he was always his number one, as well as giving Phantom her name.

Like many other Changewings, Phantom has a solid red base with lighter spots on her body. She has faint pink shades on her wings and a pale yellow underbelly.

Before being trained, Phantom was very violent and would shoot acid at anyone who came too close. She was also a little mischievous, as she constantly hypnotized Hiccup and sent him on wild adventures. But after Hiccup trained her, she became much less violent and willingly helped defeat the Purple Death. However, she was still a little bit violent, as she argued with Toothless towards the end.

Phantom is also very creative with her hypnosis, because she hypnotized Hiccup into doing crazy things like nesting in the rafters of the Great Hall and kissing Tuffnut.

Phantom disliked Hiccup at first, and repeatedly hypnotized and spat acid at him and was generally vicious towards him. But after Hiccup found out that Phantom didn't like the audience of the other dragon riders, he managed to train and befriend her.

While Hiccup was trying to train Phantom, Phantom didn't like the presence of the other riders and the audience. The others also didn't think that she could be trained.

Phantom was hostile to the other dragons as well, and they put her back in her cage after she hypnotized Hiccup. 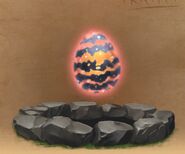 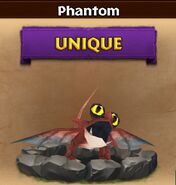 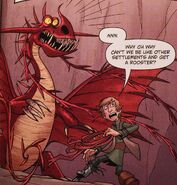 Retrieved from "https://howtotrainyourdragon.fandom.com/wiki/Phantom?oldid=608449"
Community content is available under CC-BY-SA unless otherwise noted.