Peggy is a female Night Terror who first appeared in "Gruff Around the Edges".

Peggy is one of the Night Terrors belonging to Smidvarg's sizable flock and resides on Dragon's Edge. One day she discovers Tuffnut Thorston tied up tightly in a cave on Dragon's Edge. He befriends her and she chews his ropes. Despite her small size, she manages, with difficulty, to fly Tuffnut back to the Edge settlement and to Hiccup's Hut by grabbing him by the arms. They crash on Hiccup's deck and Tuffnut thanks her then shoos her away.

Peggy is the standard color of a pack Night Terror - dark greenish-black with a dark grey underbelly. She has a yellow-black back and orangey-yellow eyes. 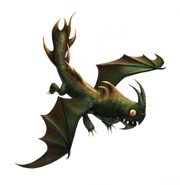 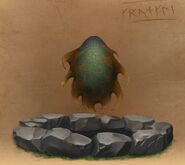 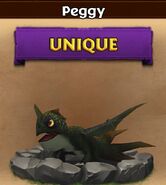 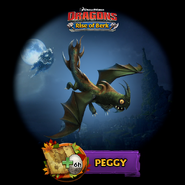 Retrieved from "https://howtotrainyourdragon.fandom.com/wiki/Peggy?oldid=601855"
Community content is available under CC-BY-SA unless otherwise noted.