Owls are birds seen minimally in the DreamWorks Dragons franchise.

The owl is a nocturnal bird from the Order Strigiformes. They have an unique appearance with a round face and very big eyes. They have a binocular vision which helps them hunt. However, they are farsighted and cannot see things close to them.

They can rotate their head up to 270° due to the 14 neck vertebrae. They also have asymmetric ears that allows them to detect the direction of the sound with more accuracy. Unlike most birds of prey, the owl's beak is short, curved and downward-facing, allowing its field of vision to be larger.

While there is no function for owls in the franchise, they can be used for hunting the rodents that might destroy the plants people are cultivating.

Some owls can be even kept as pets or trained for entertainment purposes. In Viking times, owls were sometimes used in falconry alongside the note traditional falcons.

While the owl does not physically appear, Eret, Son of Eret wears a metal owl brooch pinned on his fur vest. Owl faces are also painted on the shields of many of his men.

Eret can still be seen wearing his brooch in How to Train Your Dragon: The Hidden World.

A metal owl is a collection object that can be obtained while searching with Toothless in order to complete collections.

The Stormcutter, Dimflight, is said to be a "night-owl", indicating that she is mostly active at night.

Owl hoots can occasionally be heard as background sounds on Hobblegrunt Island.

A Snow Owl can be seen in the background of the 2021 Snoggletog Maze.

Owls are mentioned in the description of the Humbanger Groggy Fogtrotter.

The Sharp Class dragon Stormcutter was inspired by a grey owl. 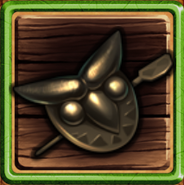