"Alvin and the Outcasts"

The Outcasts are a tribe of Vikings that have been banished from various tribes, particularly the Hooligan Tribe. Its leader is Alvin the Treacherous, a former Hooligan. While originally enemies of Berk, the two tribes eventually made peace and became allies.

Not much is known about how the Tribe got started or how they arrived on Outcast Island. At the time of "Alvin and the Outcasts", Alvin the Treacherous had been the chief of the Tribe for some time. He himself was banished from Berk, but it is unclear if the other Outcast Tribesmen are also from Berk, other locations, or already existed before Alvin became chief.

The Outcasts utilize a variety of weaponry - crossbows, catapults, axes, bludgeons, and swords. One of their more iconic weapons however, is the spear. In addition to the standard single-pronged spear, the Outcasts also wield a more elaborate bident, or two-pronged spear. At the end of a long sturdy wooden pole sits what resembles asymmetrical flattened metal wings tapering to points.

The Outcast Tribe makes its first appearance in "Alvin and the Outcasts". The Outcast tribe is known to be Outcasts of Berk. The chief of the tribe is Alvin the Treacherous who brings his tribe to Berk, seeking the "Dragon Conqueror" (Hiccup). After learning that Hiccup is a Dragon trainer, and that the Berk Vikings have learned to ride dragons, Alvin decides that the Outcasts will learn to train the dragons in order to use them to attack and destroy Berk. Alvin and his Outcast tribe have made several appearances throughout the series.

Alvin the Treacherous and his men see Hookfang out alone, and the chief decides to capture the dragon and use him as bait for Hiccup in "Dragon Down". They track him to an unnamed island and leave his shed scales as a trail for Hiccup to follow. Hiccup arrives and is captured by the Outcasts, but is later freed by the other Dragon Riders.

In "The Stowaway", the Outcasts stage a fight at sea and sneak aboard a stowaway on a Berk ship. The stowaway is a boy named Hroar, and he pretends to be from the island of Knaff. He gets in good graces with the villagers, and Stoick tells the Riders to teach him to train dragons. Torch even becomes his temporary dragon. However, he has the ability to incite aggression in the dragons, and Hiccup is left cleaning up the damage from angry dragons in the village. Ultimately he reveals his plan as an Outcast to anger all the dragons on Dragon Island to attack Berk.

The waters around Berk are choppy and wild, which Alvin sees as an opportunity to invade Berk in "The Legend of Ragnarok". However, the sea's disturbance is caused by a gigantic dragon called the Purple Death. In a rare display of fair play, Alvin and his warriors help the Hooligans fight off the huge dragon.

They also, inadvertently, use a Screaming Death egg to attack Berk in "The Iron Gronckle". The outcasts then formed an alliance with Dagur the Deranged and his Berserker Tribe in "A View to a Skrill, Part 1". However, Alvin was disposed of and was apparently killed off by Dagur's Frozen Skrill. Savage then led the Outcasts under Dagur's leadership in "A View to a Skrill, Part 2".

In "Dragon Eye of the Beholder, Part 1", for three years, the Outcasts loyal to Alvin guarded Dagur and his loyal Berserker and Outcast soldiers. However, Dagur was able to fight his way past them to make his escape.

In "A Time to Skrill", the Outcasts were forced to abandon their island when the Frozen Skrill escaped hibernation. However, they soon returned to their home after the Dragon Riders tamed the Skrill.

In "Shell Shocked, Part 1", after the Dragon Hunters attack the island of the Defenders of the Wing, the Dragon Riders fear that their other allies will be next. To that end, they move to defend Outcast Island from attack, only for the Shellfire to attack Berserker Island instead.

The Outcasts then asked for help from Fishlegs' alter ego, Thor Bonecrusher, in rescuing Alvin from several Dragon Hunters and Krogan's allies, led by Jarg, in "Return of Thor Bonecrusher".

Upon hearing Stoick’s condition in "Guardians of Vanaheim", Alvin and several other Outcasts set sail to Berk to help in defending the chieftain from further more attacks by the Dragon Flyers. 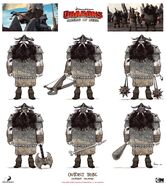 Outcasts knocked out by Dagur in "A View to a Skrill, Part 2"

In "Return of Thor Bonecrusher"

Retrieved from "https://howtotrainyourdragon.fandom.com/wiki/Outcast_Tribe_(Franchise)?oldid=550846"
Community content is available under CC-BY-SA unless otherwise noted.