How to Train Your Dragon Wiki
Register
Don't have an account?
Sign In
in: Objects, Franchise Objects, Dagur's Gear,
and 5 more

Oswald's Diary is the diary of the former Berserker chief, Oswald the Agreeable. When he went missing and his son, Dagur, and daughter, Heather, started to look for him, they used his book to find clues to where he could have been.

This is a diary belonging to Oswald the Agreeable which later came into the possession of Dagur and Heather, who used it in their search for him. However, it only leads them to dead ends. To prevent Heather from going into what would effectively be a suicide mission, Dagur secretly takes the diary from her. He then goes to Dragon's Edge and shows it to Hiccup, asking for his help. Hiccup later looks in the diary and finds a sketch of a Sentinel, a dragon found only so far on the mythical dragon elderly home haven known as Vanaheim.

Before they leave, Fishlegs looks through the diary too, showing the others Oswald's sketches of the island. 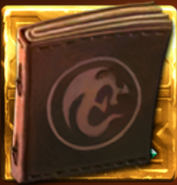