How to Train Your Dragon Wiki
Register
Don't have an account?
Sign In
Advertisement
in: Dragons, Characters, Dragon Characters from the Books,
and 8 more

Due to the 'evergreen' nature of Driver Dragons, One Eye and his pack pull a large sleigh with Gobber the Belch and the Hairy Hooligan Novices on a 'Hunting-With-Bows-and-Arrows-on-Skis expedition to Mount Villainy. Gobber drives them hard and threatens them with a whip. Upon arriving, Gobber instructs the students to have a Driver Dragon haul them up the mountain so they can ski down it and shoot Semi-Spotted Snowpeckers. He then promptly goes to sleep. Hiccup picks out One Eye as the Leader and attempts to ask him nicely to take the boys up the mountain in Dragonese. One Eye, having been subjugated for decades by humans, finds it amusing to have a human speaking Dragonese but does not move. Snotface Snotlout immediately snatches up the whip and gleefully whips a Driver Dragon and yells at them as inferior being. This angers One Eye and the other dragons, but unfortunately is effective. One Eye is left to take Hiccup and Fishlegs up the mountain. He finds their pathetic antics at skiing and hunting amusing, as well as when Fishlegs goes Berserk and insults a group of Hysterics. As Hiccup decides to ski off an enormous cliff to escape the Hysterics, he asks One Eye to catch him. One Eye scoffs, wondering why he ought to save a human. Hiccup explains - mid-air - that if he dies, Snotlout would be chief. At this, One Eye decides Hiccup would be preferable over Snotlout, and prevents him from smashing into the ice below.

Later, Hiccup comes to One Eye, asking for help retrieving a mythical vegetable from the Hysteric Tribe, which is the cure for Vorpentitis. At first One Eye refuses to help him and therefore help humans, but Hiccup reminds him that dragons also die from Vorpentitis. If they are successful in getting the antidote, he would share it with dragons and humans alike.

In How to Steal a Dragon's Sword, when Alvin was crowned King of the Wilderwest, One Eye starts to attack him, although he is held back. As Alvin was about to kill him, the dragon rebellion begins, and One Eye joins the Red Rage.

One Eye is a large Sabre-Toothed Driver Dragon - at least as large as a big cat such as a lion. As is typical of the Driver Dragon species, he is pure white and has two extremely long fangs emerging from the from of his mouth. He has a wreath of horns around his head and a "tail with a spiky point". One Eye is so-called because he is missing his left eye from unknown circumstances.

He hates humans in every way when he is first introduced, due to being enslaved for decades. By speaking Dragonese and showing him respect, Hiccup manages to get One Eye to accompany him on a quest to find a cure for Fishlegs (which is actually for himself) for Vorpentitis. In the end, One Eye develops a fondness for Hiccup, which is a first for him.

One Eye on the cover of How to Cheat a Dragon's Curse. 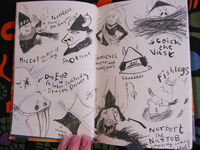 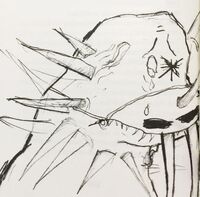