How to Train Your Dragon Wiki
Register
Don't have an account?
Sign In
Advertisement
in: Characters, Humans, Human Characters from the Books,
and 15 more

Old Wrinkly is an Elder of the Hairy Hooligan tribe and grandfather to Hiccup. He first appears in the children's book Hiccup: The Viking Who Was Seasick. His role is reprised in the main Book series as a minor character, starting with How to Train Your Dragon.

Hiccup goes to sea with his father, Stoick, and other adult Vikings. During the voyage, he gets seasick, a storm hits, the other Vikings get seasick and they get blown off course. Hiccup takes charge and steers them back home. Old Wrinkly asks if Hiccup found out if Vikings get scared. Hiccup and Stoick reply that yes, sometimes they do, but they are brave and overcome their fears.

Old Wrinkly reappears in How to Train Your Dragon, this time advising a much older Hiccup. He took up soothsaying and predicted that his grandson had a grand future in front of him. Old Wrinkly offered cryptic comfort to Hiccup when Hiccup realized he had grabbed the smallest most ordinary dragon possible from the Dragon Nursery.

After discovering that his dragon was very small and unremarkable, Hiccup sought out his grandfather for advice. Old Wrinkly suggested that Hiccup see things from a different perspective, such as that his dragon was not small compared to the other boys' dragons, but rather all their dragons were minuscule compared to Sea Dragons of immense size. He also suggested that perhaps their tribe needed a new type of leadership and that perhaps Hiccup would have to train his dragon and become a hero the "hard way".

At the appearance of the Green Death on Long Beach, Stoick turns to Old Wrinkly for information and advise about the Dragon.

In How to Be a Pirate, the Hooligan Novices encounter a coffin at sea during lessons and eventually bring it back to Hooligan Village. It is the coffin of Grimbeard the Ghastly, and clearly states not to open it. Old Wrinkly and Hiccup are the only two people gathered from the village who recommend not opening the coffin, as advised. However, the tribe opens the coffin anyway and find Alvin, the-poor-but-honest-farmer inside.

After Hiccup looses both half of his How to Speak Dragonese notebook and Toothless, Old Wrinkly tried to ask him what's wrong, as Hiccup appears very depressed and does not eat breakfast. Stoick becomes unmanageably upset when he receives a letter from Big-Boobied Bertha declaring a Blood Feud and refuses to listen to Hiccup that it is actually a 'Fiendishly Clever Plan' of the Romans.

Old Wrinkly uses his soothsaying abilities to predict the outcome of the Young Heroes Smashsticks-on-Ice competition at the Freya'sday Fete, and divines wrong, causing Stoick to loose money in bets. During the competition, Fishlegs, who is feeling ill, yet again falls into his berserker mode. Hiccup takes him to see Old Wrinkly in his "large untidy house on the beach". Again divining, Old Wrinkly determines Fishlegs has Vorpentitis, which is a fatal poisoning from the Venomous Vorpent dragon. Hiccup is devastated. Old Wrinkly proceeds to tell Hiccup a story about the Hysteric Tribe (who believes the world is round, not flat) and a mythical vegetable called a Potato. Determined to save his friend, Hiccup leaves secretly on a Quest for the Frozen Potato on Hysteria, leaving Old Wrinkly to tend the feverish Fishlegs.

When Hiccup returns home, Old Wrinkly admits he 'read the fire' wrong, and it is in fact Hiccup who got stung by the Venomous Vorpent. Hiccup falls over deathly ill. Old Wrinkly is unconcerned, and asks Camicazi, who accompanied Hiccup, for the mythical potato. When she admits the potato is gone, then Old Wrinkly panics. Just as Hiccup is about to die and babbles incoherently, a recovering Fishlegs seems to understand what he is sating and shoots Hiccup with the arrow he brought back. The arrow happened to be stuck in the potato for 15 years and had potato juice on it, thus curing Hiccup.

Portending Doom for the Archipelago

At the beginning of the story, a poem is written, telling of an "old Man" who feels the coming problems are his fault and takes a vow of silence and places himself in a hole. This is self-punishment for interfering with fate in the past. This is an oblique reference to Old Wrinkly, as is revealed through the story.

At the start of Book 5, Berk and most of the Archipelago is accosted by a severe heat wave. Old Wrinkly is frequently "babbling" about the heat being a "terrible Omen of Doom" and that a "new kind of Terror-Dragon had awoken in the West". No one pays him much heed.

Old Wrinkly is very wise and loving towards Hiccup.

He is referred to as "the thinker of the tribe" and is skilled at seeing the bigger picture of things, such as referring the Thors'day Thursday initiation as a "piddly little test", and realizes the danger of it lightening the sleep of a few very large and ancient Sea Dragons. He is usually depicted as a wise, frail old man smoking a pipe.

Old Wrinkly is, as his name suggests - old and wrinkly. He is rather thin and gangly. In Hiccup the Viking Who Was Seasick, Old Wrinkly is depicted as having red hair, as opposed to white or grey hair as one might assume. His beard is longer than he is tall and tapers to a messy point. His helmet is dark and conical, with two very curled horns.

In Hiccup: The Viking Who Was Seasick, Old Wrinkly is described as "the oldest Viking of all ... whose barnacled beard fell down to his toes." He is illustrated as having bright red hair. He also had breath that "was like being kissed by mackerel".

Old Wrinkly fancies himself a soothsayer for the tribe, but most think he is incorrect in his predictions. However, as the reader finds out, his predictions are not necessarily wrong, just not obvious.

He also tries to divine who will win the Smashsticks-on-Ice competition during Freya'sday Fete, incorrectly.

Old Wrinkly is also the Tribe's healer, and has a listing of remedies called Old Wrinkly's Cures for Common Illnesses.

Old Wrinkly also knows other languages such a Latin, which he teaches to Hiccup, as mentioned in How to Speak Dragonese. Though not mentioned specifically, Hiccup knows French, possibly taught by Old Wrinkly.

Old Wrinkly is "Hiccup's grandfather on his mother's side". He is the one who tells Hiccup 'the world is changing' and a new generation of heroes is needed. He is very observant and watchful over Hiccup, finding out he is a friend to most dragons by spying on him. He is fluent in Latin and (against the wishes of his father) teaches it to Hiccup, saying it will "come in handy someday".

Although it was not specifically shown in the books, Old Wrinkly and Valhallarama had a good relationship. As she was his daughter he was quite protective of her, because of this he set an impossible task if anyone wanted her. Many people failed the task including Humongously Hotshot the Hero. In his ‘older’ age he did regret how cruel the task was.

Stoick the Vast was his son-in-law. Because of their age gap and also Stoick being a typical Viking-type, they didn’t have a close relationship. Old Wrinkly always tried to reason with Stoick when he was acting without much logic. In Stoick’s perspective, Old Wrinkly was quite an unreliable soothsayer and thought he might be going a little senile. 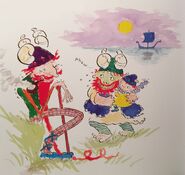 In Hiccup: The Viking Who Was Seasick 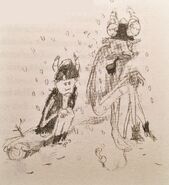