The Octopus is mollusk which has a minor appearance in DreamWorks Dragons Franchise.

The octopus is classified in the Phylum Mollusca, despite not having a visible shell usually associated with this group. The tissue giving rise to shells in other mollusks is used for internal structures. But the Octopus is most known for it eight tentacles with "suction cup", or suckers down their length. Octopuses have a "head" which contains most of their organs. Because they do not have a shell, octopuses are able to squeeze through the tiniest of openings.

Octopuses are restricted to only marine waters. None are found in fresh water. However, they can be found in all temperatures of ocean water and at varying depths.

Octopuses are also known for their camouflage and defense mechanisms. They produce "ink", which is a dark murky substance they can exude in times of stress. They share this mechanism with Squid. Also like squid, octopuses have specialized cells in their skin called "chromatophores" which allow them to change color and reflect light.

Octopuses are only seen used as Viking food in the DreamWorks Dragons Franchise.

Octopuses are also readily eaten reality. Octopus ink is also edible and used in cooking. They have also been used in research to study their regeneration abilities, camouflage, and intelligence. They are also often seen in public aquariums.

In this seek and find activity book, octopus tentacles are seen along with other sea food in a scene depicting the Haddock home.

An underwater area at the Ship Graveyard that the player can explore is introduced during the Expansion, "Secret of the Leviathan". One of the creatures in the background occupying the area is a single large octopus. 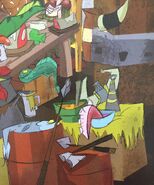 Retrieved from "https://howtotrainyourdragon.fandom.com/wiki/Octopus_(Franchise)?oldid=397268"
Community content is available under CC-BY-SA unless otherwise noted.