Nozehair is a Hooligan that appears briefly in the Comic, "The Endless Night".

Nozehair appears in only a few panels, but is named and seen with another Viking, Cleftjaw. Therefore it is not clear which Viking is which. It is possible Nozehair is the Viking sporting the handlebar mustache.

A distant stranger named Skuld the Sorceress appears on Berk during the events of "The Endless Night", and mysteriously seems to bring about Night during the Day and the vanishing of villagers. Nozehair is one of the "disappeared". Later however, the Dragon Riders discovers that those that disappeared were actually kidnapped to be sold as slaves by the Thunderhead Tribe, who are working with Skuld the Sorceress. Astrid frees Nozehair and Cleftjaw from the Thunderhead's ship. 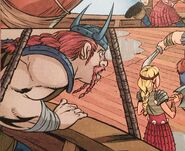