The Northlands is a location visited in the Riders of Berk comic, "The Ice Castle".

The Northlands are described as a vast area occupied by the Northlander Tribe. It is, presumably from its name, North of Berk. It is a snowy and icy place with many geological features mentioned in "The Ice Castle", such as the Ice Needles, Labyrinth of Lost Souls, Balder Bay, Jotun Hot Springs, and the volcano Utgard-Loki.

The main location in the comic, the "Ice Castle", appears to be in the caldera of a presumably extinct volcano, so the Northlands, while a cold place, has alot of volcanic activity and geothermal heat.

During the events of "The Ice Castle", Arngrim Dammen is a trader of furs from the Northlands who arrives at Berk to find out if it is true that Berk trains dragons. He steals Stormfly for breeding stock and returns to the Northlands to set up an auction of dragons and dragon eggs at the "Ice Castle". 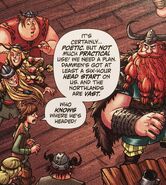 Retrieved from "https://howtotrainyourdragon.fandom.com/wiki/Northlands?oldid=235238"
Community content is available under CC-BY-SA unless otherwise noted.