How to Train Your Dragon Wiki
Register
Don't have an account?
Sign In
Advertisement
in: Tribes, Franchise Tribes

"The Ice Castle"
The Northlander Tribe are traders that deal in furs, dragons and dragon eggs. They live in the Northlands.

As shown in "The Ice Castle", Gobber had some set-tos with the Northlanders, making Gobber distrust them. The Chief of the Northlanders, Arngrim Dammen headed south posing as a fur trader when he heard stories of Berk's Vikings riding dragons. After trading his furs, Dammen stole Stormfly and sailed back to his fortress near Balder Bay. Dammen and his Northlanders then held an auction of dragon eggs, including a Whispering Death one. However, they were interrupted by the Dragon Riders and the Hooligan Tribe, who came to rescue Stormfly. Most Northlanders then ran for their lives, while the other prepared to fight. They were, however, outnumbered by the Hooligans. After rescuing Stormfly, the Dragon Riders freed the other dragons too, and accidentally hatched the Whispering Death, which began destroying everything. Although Dammen tried to escape with the remaining eggs, he was soon cornered by dragons and surrendered himself. The Hooligans locked him in Berk's dungeons and took the dragon eggs to Berk. It is unknown what happened to the rest of the Northlander Tribe. 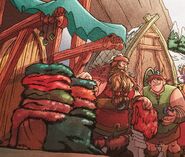 The Northlanders trade in colorful furs