The Northern Alliance[1] was a military junta led by the self-proclaimed "Dragon God", Drago Bludvist.

When he was a boy and lost his family, Drago vowed to rise above dragons. Thus he set himself to conquer the world by using dragons. During his earliest conquests, he found a Bewilderbeast hatchling and raised it with cruelty. He then formed the Northern Alliance composed of Dragon Trappers from numerous nations such as Slavic, Sami, Inuit, and Asiatic, along with thousands of enslaved dragons. He also built many traps, weapons, and armor made for his enslaved dragons.

About 15 years before the events of How to Train Your Dragon, Drago attended a gathering of chiefs to speak to Chief Stoick the Vast and others. There, Drago claimed that he alone could control dragons if Stoick and the other chiefs would follow him. Stoick and the other chiefs laughed at Drago's claim until Drago wrapped himself in his cloak and cried out, "Let's see how well you do without me!" At that moment, several of his armored dragons attacked the Great Hall, burning all the chiefs alive except Stoick.

As revealed in "The Wings of War, Part 1", after burning down the Great Hall, Drago met up with Krogan, and they made their escape aboard a pair of Rumblehorns.

By the time of "Midnight Scrum", Krogan appears again, where he knocks out Throk with a dart after a difficult battle and captures Hiccup in an attempt to get the bounty on him placed by Viggo Grimborn. Upon bringing Hiccup to Ryker Grimborn, he is betrayed and ambushed by several Dragon Hunters, whom he defeats. Later, Krogan attacks Hiccup, who had escaped during the ambush, stating that he would take him to Viggo himself to get the bounty. During their battle, Hiccup removes his mask and recognizes him as the same man who attempted to buy Toothless at Viggo's dragon auction, much to Hiccup's anger. When they both end up hanging at the end of a cliff, Krogan grabs onto Hiccup's prosthetic leg and tells Hiccup to drag him up. However, much to his shock, Hiccup, still angry at him for attempting to buy Toothless, instead removes his prosthetic leg and sends Krogan falling below.

After the Dragon Riders rescue Hiccup, Ryker attempts to throw a dagger at him, only for Krogan, who is shown to have survived, to knock him out. Realizing that he is outnumbered, he jumps out of the cliff and escapes without a trace.

In "Living on the Edge", Krogan then took over the Dragon Hunters after the apparent demise of Viggo and captured the Death Song of Melody Island. He and the Hunters then used it to capture other dragons.

By "Return of Thor Bonecrusher", Krogan then had several bandits hold the Outcasts' chief, Alvin the Treacherous for ransom. The bandits demanded to be paid in Ice Tail Pike to secretly feed the Northern Alliance. However, they failed and were most likely executed for letting the Dragon Riders get involved. Krogan then formed a partnership with Viggo, who turned out to still be alive.

During the events of "Dawn of Destruction", Krogan, his Flyers, Viggo, and his Hunters then worked together to take Dragon's Edge from the Dragon Riders under Hiccup Haddock III. They were successful.

In "The Wings of War, Parts 1 and 2", Krogan, his Flyers and Viggo with his Hunters then searched for the Dragon Eye in Dragon's Edge's volcano. Viggo was successful and he then worked on it. Krogan, who was watching when Viggo tested it to see if it would work and when it did, Krogan threatened to kill Viggo for it. However, Krogan was stopped when Viggo was informed that Berk's fleet and their A-team were approaching the Edge.

Krogan then sent his Flyers to deal with Stoick, Hiccup's riders, and the A-team. However, Hiccup and Berk's forces were able to free the Flyers' Singetails. However, Krogan and Viggo then made their escape on Krogan's Singetail in a fog bank along with the Dragon Eye.

In "Sins of the Past", Krogan then arranged for Harek to claim that Oswald the Agreeable was alive in order to get Heather's Dragon Eye lens. He then had his Flyers go after Heather, Snotlout, and Johann. The Flyers were then able to capture Windshear. Krogan then arranged an exchange at the Sea Stacks; Windshear for Heather's Dragon Eye lens. The Flyers then knocked Windshear's cage into the sea and made their way back to Dragon Hunters' headquarters. There, Krogan and Viggo installed the lens as they were joined by their, previously silent, employer, Johann.

Following the defeat of the Dragon Hunters and the Dragon Flyers in "King of Dragons, Part 2", Krogan is brought before his superior Drago Bludvist. Drago clarifies his displeasure by chastising Krogan for his failures and proceeds to have the latter executed. Drago then tells one of his soldiers to bring him his maps and plans to find another King of Dragons himself.

When news reached Berk about Drago Bludvist’s growing army of humans and dragons, Stoick set the entire island on lockdown. But Hiccup believes that he could reason with Drago to prevent war.

Following Hiccup and Stoick’s absence, the other Dragon Riders captured Eret, Son of Eret as a hostage who will lead them to Drago’s camp. When they reached the place, the Northern Alliance ambushed them and took the dragons for their master. Drago then learned about Berk’s coexistence with dragons and decided to launch an attack on Valka's Mountain before moving on to Berk.

A huge battle errupted when the Northern Alliance laid siege on Valka’s Mountain. Despite the Dragon Riders’ best efforts, Drago's Bewilderbeast managed to kill Valka's Bewilderbeast and took control of all the dragons before ordering the mind-controlled Toothless to kill Hiccup. Stoick sacrificed himself by taking the blast and the satisfied Drago rode on Toothless to lead all the dragons to Berk, informing his followers to meet him there.

One year after Drago's defeat, the Northern Alliance was eventually controlled by the Warlords who continued to poach and capture dragons throughout the Barbaric Archipelago, only to have their operations continuously foiled by the Dragon Riders of Berk. The constant interference of the Dragon Riders forced them to hire Grimmel the Grisly, a famed dragon hunter, to capture all of Berk's dragons, including Toothless, the last living Night Fury.

The Northern Alliance is eventually defeated for good after the Dragon Riders rescued all of their dragons, burned most of its ships, and caged its Warlords.

The navy of the Northern Alliance appears repeatedly in this game in a 'Defend Berk' activity for players. Drago attacks Berk again and again from the sea with a collection of various ships. The player must send dragons to battle the ship and defeat them.

Dragons: Rise of Berk also reveals the training and duties of some of the dragons under his control:

Krogan in Dragons: Race to the Edge 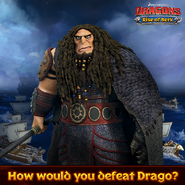 Retrieved from "https://howtotrainyourdragon.fandom.com/wiki/Northern_Alliance?oldid=601595"
Community content is available under CC-BY-SA unless otherwise noted.