How to Train Your Dragon Wiki
Register
Don't have an account?
Sign In
Advertisement
in: Characters, Humans, Human Characters from the Books,
and 10 more
English

Norbert the Nutjob is the chief of the Hysteric Tribe. He is the son of Bigjob and a genius inventor. He is an arch enemy of Hiccup and owns a double headed axe that decides the fate of his prisoners. Norbert has a great dislike towards Camicazi too, ever since she had a swordfight with him and knocked him out with his own potato, and has tried twice to kill her.

First Encounter With Hiccup and the Frozen Potato

Norbert and some of his men travel across the frozen Wrath of Thor from Hysteria to Villiany to hunt for deer. The Hairy Hooligan Viking Novices are also there for a hunting on skis lesson. Fishlegs, who is becoming sick, slips into his Berserk mode and madly insults and tries to attack the hunting group. Shocked and angered the hunters pursue him. Hiccup tries desperately to save his friend and ends up striking one in the rear-end with an arrow - Norbert the Nutjob. Though Hiccup and Fishlegs manage to escape, Norbert vows revenge, angered by the situation.

Later, on Freya's Day Eve, Hiccup learns that Norbert may have a mythical potato in his possession. It is the only thing that might cure Vorpentitis. Hiccup and Camicazi infiltrate the Hysteric Great Hall, where Norbert and the Hysterics are feasting. Hiccup slips and falls into a large vat of onion soup and is caught. Norbert recognizes him and tosses his Axe of Doom into the air to decide Hiccup's fate. Hiccup takes matters into his own hands and snatches the axe from the air and strikes it into wood, shiny side down, indicating he lives. While Norbert honors not killing him in case he angers "Fate", he does imprison Hiccup for his transgressions.

Camicazi eventually helps free Hiccup and steal the precious potato. The two children leave Hysteria with panic and fire in their wake. They make it out to the Sullen Sea on their sleigh, but Norbert catches up to them in his own. The thick ice suddenly cracks and the Doomfang that has been terrorizing the Hysterics for 15 years rears up. It steals the potato from Hiccup's grasp and leaves. Hiccup inadvertently lifted the 'curse' on the Hysterics, and Norbert let him and Camicazi go because of it.

Norbert regains his ticking-thing after capturing Hiccup, Camicazi, and Fishlegs No-Name, and is about to exact his revenge upon Hiccup when he realizes he in fact cannot read the ticking-thing, and changes his mind. Throughout the story, he is anxious to kill Hiccup when he reaches America, and when he at last sees land, he and Hiccup start a huge fight that rouses the other Hysterics onboard. The Leviathorgan also causes much mayhem, destroying the ship and devouring all of the hapless Hysterics. Norbert and Hiccup face off on the mast of the sinking ship, but just as Norbert raises his axe to kill the helpless Hiccup, a bolt of lightning from the raging storm high above strikes him with ten thousand volts of electricity. The blast is so powerful that the whole ship, including the Leviathorgan that tried to eat it, is destroyed, and Norbert the Nutjob plummets straight into the see and is weighed down to the depths of the ocean by the ruined Axe of Doom.

In the last book, Norbert is revealed to have survived, and has hidden himself among the Wanderers. He also has the Dragonmark, hinting that he has sided with Hiccup in the war, despite wanting to kill him.

Norbert the Nutjob is a large but lean Viking with blonde hair and beard. Black and white images of him give the impression of a dark hair color, however. He is also depicted as having unevenly-sized eyes, as the left one has a very noticeable tic. He is also described as having "fancy mustaches". In images he has a long thin mustache that sticks out to the sides of his face and curls at the ends. 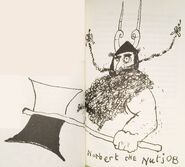 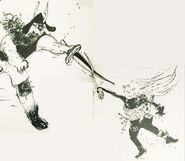