Nolan Ramsey North (born October 31, 1970) is an American actor who has been described as "the nearest thing the games industry has to a bona fide leading man." His voice work includes characters such as Nathan Drake from the Uncharted series; Desmond Miles from the Assassin's Creed video game series; Ghost from the Bungie title Destiny; the Penguin in the Batman: Arkham video game franchise; Cpt. Martin Walker in Spec Ops: The Line; David in The Last of Us; several characters in various pieces of Marvel media, most popularly Deadpool; Superboy in Young Justice; himself in Saints Row IV; Edward Richtofen in the Call of Duty Zombies storyline, and Superman in the Lego DC Comics Super Heroes film series.

Nolan North is the voice of Stoick the Vast in Riders/Defenders of Berk, and Race to the Edge, as well as the short Dawn of the Dragon Racers.

North was born in New Haven, Connecticut. He majored in journalism at the University of North Carolina with a baseball scholarship. He worked as a reporter for almost a year in New Jersey before moving to New York City to pursue stand-up comedy and acting. North eventually relocated to Hollywood and was cast in the General Hospital spin-off series Port Charles, playing Dr. Chris Ramsey during the show's run from 1997 to 2003. He married fellow Port Charles actress Jill Murray in 1999 and has two children. During Port Charles' run, he worked on a few video games as a voice actor and began to focus on voice acting following Port Charles' cancellation.

One of his most notable roles came in 2007 when he voiced and motion capped the character Nathan Drake for the video game Uncharted: Drake's Fortune. Since then, he has continued to portray the character in Uncharted 2: Among Thieves (released in 2009) and Uncharted 3: Drake's Deception (released in 2011). He also voiced The Penguin in the Batman: Arkham series, appearing in three of the four games and in one of the DLC's. In an interview with The Guardian, North reflects on his time as Drake as requiring "a lot of imagination. Motion capture is basically theatre in Spandex; there's minimal props, and you need a willingness to make an ass of yourself." North as Drake has been twice nominated at the Spike Video Game Awards in the "Best Performance by a Human Male" category. North will reprise his role as Drake in Uncharted 4: A Thief's End, to be released in 2016.

North had a role in Star Trek Into Darkness, the sequel to 2009's live-action movie Star Trek. Director J. J. Abrams cited North's performance as Drake for the casting, he and his son being fans of the Uncharted series. 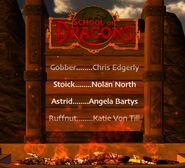 Retrieved from "https://howtotrainyourdragon.fandom.com/wiki/Nolan_North?oldid=518865"
Community content is available under CC-BY-SA unless otherwise noted.