Noah K. Bentley is an American actor and voice actor who voices the character Burple in the series Dragons: Rescue Riders.

Noah started doing commercials as a very young child, and stage shows at age seven. His first big break came when he landed a regular appearance on web series Kids React at age nine. He landed an even bigger role on Fandango's Reel Kids the following year. Noah guest appeared in a number of movies and television series through the years and was honored to become a guest host for 2018's Nickelodeon Kids' Choice Awards.

He lives in Los Angeles with his parents and his American Bulldog, Duke. 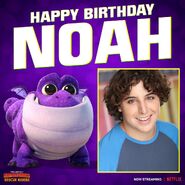