No-Name is one of Eret, Son of Eret's men during his time as a Dragon Trapper, selling dragons to Drago Bludvist. He is voiced by Simon Kassianides.

Life as a Dragon Trapper

No-Name, along with the other trappers, was attacked one night by a mysterious dragon rider and lost numerous dragons they previously captured. Their fort was destroyed by a large ice-spitting dragon afterwards.

The next day, the trappers shot down a Deadly Nadder and met Hiccup and Astrid. Like the others, he was fascinated by Hiccup's dragon blade. Immediately, the two were assumed to be working with the other rider from the night before, though the Viking couple were quite confused about the ordeal. After Eret explains they work for Drago and need to deliver a new batch of dragons by tomorrow, the trappers tried to capture Toothless, but ended up losing Stormfly, and the Vikings.

Not long after, Hiccup and Astrid returned to their ship and "surrendered." Hiccup explain it was unwise to threaten the dragons and implied they could destroy the ship, which was troubling for No-Name as he's not a good swimmer. Hiccup then hand him his dragon blade, while explaining how it worked. When No-Name released the gas, Ug sparked it, causing a small explosion. Soon the other Berk Dragon Riders showed up, taking over the ship. After listening to Stoick's encounter with Drago, the riders left and the trappers were on their way.

Later, after asking if they should go back (while holding a block of ice on his injured hand from the explosion), No-Name and the other trappers watch as Eret is kidnapped by the Dragon Riders. He is not seen again for the rest of the film.

After the reform of Eret, his former leader, No-Name, along with Ug, Teeny, and the rest of Eret's Crew, appears to have reformed as well. He, along with the other crew members, came across a Night Terror covered in pine tar from a wrecked Dragon Hunter ship on Scuttleclaw Island. No-Name and the others sent a Terror Mail to Eret informing him of the situation, sending him and the player on a quest to rescue the dragon.

Later on, Eret claimed that his old crew, including No-Name, "wouldn't believe their eyes" if they saw him taking care of the three Rumblehorn Hatchlings.

No-Name has light brown hair, a clean shaven face with a tattoo on his chin. He wears a long sleeved grey tunic, over which he wears a short sleeved tan coat with s big fur hood and brown designs down the sleeves and the front. No-Name also wears grey pants and dark brown fur boots. On his hands are black fingerless gloves. He carries a wooden staff with six barbs jutting out of it. 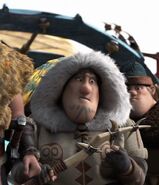 Quote from Eret in School of Dragons indicating No-Name's reform.

No-Name mentioned in School of Dragons.