How to Train Your Dragon Wiki
Register
Don't have an account?
Sign In
in: Objects, Franchise Objects, Nikora Stormheart, School of Dragons

School of Dragons (Wrath of Stormheart)

School of Dragons (Wrath of Stormheart)

Nikora's Heirloom is an object that appears in the School of Dragons Expansion, "Wrath of Stormheart".

At some point in the distant past, Nikora's people left this artifact in the Barbaric Archipelago. By some as yet untold story, it became attached to the skeleton of a Luminous Krayfin in the waters around Vanaheim. The game player finds the heirloom while swimming in Vanaheim's seas. When she/he resurfaces, Nikora Stormheart is waiting and issues an ultimatum: the heirloom for the release of Fishlegs and Skulder the Archaeologist. Eventually the player must hand over the heirloom to Nikora, and everyone escapes her ship, The Tempest.

Later, Nikora successfully presents her familial heirloom on Auction Island, and takes the island over. According to Harald Forkbeard, "her ancestors once ruled here centuries ago. When Stormheart returned with the ancestral symbol, all of Auction Island bowed to her as the leader."

The heirloom's exact size is not clear, but small enough to be held in the hand. It appears to be made of wood and leather. It is reminiscent of a hair piece or even a dreamcatcher. The heirloom is round with three wooden pins criss-crossing the back. Each has a stylized end, appearing to be fire, water, and air. There is a circular outer ring of teal and grey-brown, then a triangle in the center on which Stormheart's teal triskele is painted, along with a blue gem at its center. 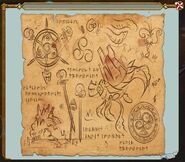 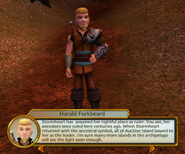