Nicolas Cantu was born in Austin, Texas, as a middle child with two brothers. At an early age he showed a self-directed aptitude for acting. He starred in several commercials, including some for Old Navy. He moved into voice-acting and is well known for his roll as Gumball in The Amazing World of Gumball.

Nicolas had also created his own YouTube channel discussing animation and gaming. 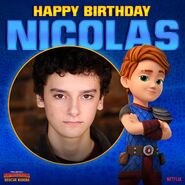