How to Train Your Dragon Wiki
Register
Don't have an account?
Sign In
Advertisement
in: Dragons, Characters, Dragon Characters from the Books,
and 8 more

Newtsbreath is one of Stoick the Vast's hunting dragons in the How to Train Your Dragon book series.

Newtsbreath and Hookfang are in the chief's hut when Toothless wakes up. The two dragons greet Toothless and Hookfang swipes at Toothless, causing the little green dragon to howl in pain. Stoick then yelled at both hunting dragons to get out. It is said that the two of them want to get rid of Toothless as he is scrawny and small, although Stoick tells Hiccup that they just want to play.

Travelling to the Isle of the Skullions

Newstbreath appears again in Book 2. Newtsbreath is revealed to not like baths as shown when he and the rest of the Hooligans get baths before going to the Isle of the Skullions to search for the Treasure of Grimbeard the Ghastly. It takes Stoick 40 minutes to catch him, and he continually bit Stoick, to which the human whacked him on the nose with the scrubbing brush.

After the treasure is found on the Isle of the Skullions, the Hooligans open the treasure chest and trigger a booby-trap. It is the release of a very strong and malodorous smell that wakes the Skullions. Newtsbreath is one of the first dragons to smell it. Later, when the Hooligan are fighting their way back to the ship through the deadly Skullions, Newtsbreath valiantly stays and helps Stoick fight the dragons off, rather than just flying to the ship to safety. He also helps fly Hiccup out of harms way by hanging onto his arm, which is a great feat for a dragon that is not of rideable size. After depositing Hiccup safely, he turns around to help Stoick again.

Newtsbreath is a Gronckle, which is a tough, though ugly species of dragon. As such, he has a short snout and many spikes and protrusions around his body.

How to Train Your Dragon indicates that he is "about the size of a leopard" and has yellow eyes. Similarly, in How to Be a Pirate, Newtsbreath is compared to a lion.

Newtsbreath somewhat fears Stoick due to the fact that he is bigger than him. Because of this Newtsbreath obeys Stoick when he yells at him. However, Newtsbreath demonstrates great courage and attachment to Stoick when it wasn't necessary in Book 2, by helping him fight off the Skullions, which are deadly dragons much larger and outnumber him.

Newtsbreath is prone to bully Toothless as he doesn't like him and Toothless is much smaller than he is. Toothless ends up sleeping in bed with Hiccup every night instead of at the hearth, as there is a real concern that Newsbreath and Hookfang might eat him.

Newtsbreath appears to respect Hookfang and appears to be his friend.

Newsbreath is introduced in Book 1, when meeting Toothless for the first time.

Newtsbreath appears in Book 2 and travels to the Isle of the Skullions with Stoick and other Hooligans in search of treasure. He displays loyalty to Stoick when fighting off the Skullions.

Newtsbreath being bathed right before the treasure hunt 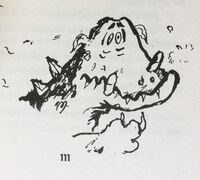