How to Train Your Dragon Wiki
Register
Don't have an account?
Sign In
Advertisement
in: Locations, Franchise Locations, Islands,
and 5 more

Nepenthe is an island ruled by King Mikkel the Munificent, and appears in the book, The Serpent's Heir.

Nepenthe is a lush tropical island, which is unusual in the Barbaric Archipelago. Possibly it has heat from geothermal activity, or as later discovered, heat from dragons. The island has pristine white sandy beaches, and is specked with mysterious hot springs, with sedative properties.

Hiccup, Valka, and the Dragon Riders fly to the island of Nepenthe at a request for aid from Calder. The island is being wracked by earthquakes that have been getting progressively worse. The Riders make several startling discoveries, and ultimately Nepenthe and its people must start fresh in an altered environment.

Skulder mentions that he and Muddie had started a new dig site on the island when they dug up another Silkspanner. Skulder later mentioned the island while relaying these events to Fishlegs and Valka.

In a nod to The Serpent's Heir, the game School of Dragons mentions Nepenthe in its expansion "Secret of the Leviathan". The expansion and the graphic novel were both released around the same time. It is possible that the emissary that Hiccup refers to is Calder, which would mean that the two take place at the same time, explaining why none of the Dragon Riders join the player on the journey to Impossible Island in the expansion pack.

Nepenthe is mentioned in this game. Villain Eir Stormheart relates that she lost her left arm during the "great Foreverwing Awakening".

Nepenthe appeared on this online map of the Barbaric Archipelago. However, no additional details were given about it on the map, nor did it appear in the Dragons: Race to the Edge series. 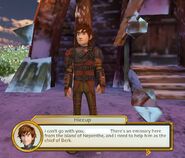 Second mention in School of Dragons.