Mysterious Marshlands, also known as Baneful Boglands, is a location that appears in the game Dragons: Titan Uprising.

The Mysterious Marshlands is composed of many small islands covered in swamp vegetation and large rocks. There is a small amount of fog which is floating at any time of the year over the islands.

The tenth main region the player visits is the Mysterious Marshlands, now called the "Baneful Boglands". The player visits some of the same locations, as well as new ones.

Under the name "Baneful Boglands" 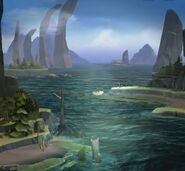 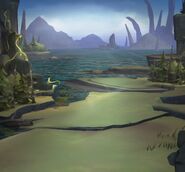 The Isle of Vanaheim