How to Train Your Dragon Wiki
Register
Don't have an account?
Sign In
Advertisement
in: Article Stubs, Locations, Islands,
and 3 more
English

Murderous Island is an island that is located in the Barbaric Archipelago. It is the home of the Murderous Tribe. During the Second Dragon War, the Ten Companions of the Dragonmark hid here from the Dragon Rebellion and the Alvinsmen. (How to Betray a Dragon's Hero)

Murderous Island has many mountains and is very rocky. It is located on the western edge of the Barbaric Archiepelago, with direct access to the open ocean, and because of this, it is often the location where the Intertribal Swiming Race is hosted. It is also situated North of the Isle of Tomorrow, east of the island of Hero's End and west of Grimbeard's Despair. Notable locations include: The Singing Sands of the Ferryman's Gift, where all kings in waiting of the Wilderwest must come to present the Ten Lost things before being crowned king on the Isle of Tomorrow, as well as Wreckers Bay, where the last battle in the Second Dragon War was fought and the Alvin and the Witch Excellinor defeated. 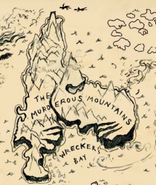