How to Train Your Dragon Wiki
Register
Don't have an account?
Sign In
Advertisement
in: Locations, Franchise Locations, Bodies of Water,
and 2 more

The Mouth of Fafnir is a location mentioned multiple times in the Comic, Dangers of the Deep, and is noted to be part of Berk's Territorial Waters.

The Mouth of Fafnir is an underwater feature in the waters surrounding Berk. It appears to be a chain of underwater mountains and rock formations, which has an opening, or "mouth". Fish migrate into Berk's water through this channel.

According to Astrid's commentary in the Comic book, there are also reefs in the area and close by. 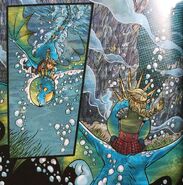