Mosquitoes are insects that appear nominally in the DreamWorks Dragons Franchise.

Mosquitoes are insects of the Order Diptera - making them related to flies and of the Family Culicidae. As with other insects, they have six legs and have wings. Mosquitoes need water in which to lay their eggs, but what water each species needs can vary widely. Some can lay their eggs in saltwater. Some need rivers and streams or lakes. Some can make use of any bit of collected standing water such as puddles or tree hollows.

This School of Dragons factoid is somewhat unspecific. The larvae of many species of mosquitoes do eat algae and bacteria. Adult mosquitoes however have a varied diet - females of species significant to humans take blood meals, males of those same species may subsist on sugar sources such as nectar.

Mosquitoes have no role in the Franchise, other than for educational purposes.

In reality, while mosquitoes are an important part of ecosystems and food chains, they also serve as disease vectors for humans and other creatures.

In the opening monologue by Hiccup, he mentions mosquitoes as possible pests in other locations, in comparison to Berk's dragons as pests.

As this game provides an abbreviated retelling of the How to Train Your Dragon film, Hiccup's narration about Berk having dragons as pests rather than other places that have mosquitoes is featured. Mosquitos are not seen in this game.

Mosquitos are mentioned in the quest Learn About the Food Chain. Ruffnut mentions that even though algae stinks, the mosquitoes love it. Mulch also mentions that mosquitoes are eaten by fish. 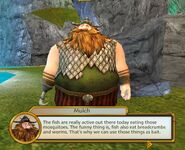