How to Train Your Dragon Wiki
Register
Don't have an account?
Sign In
Advertisement
in: Dragons, Dragon Species from the Books, A Hero's Guide to Deadly Dragons,
and 4 more

Camouflage and the usual talons and fire...6

Put it this way, you don't want to meet a mood dragon in a BAD mood...6

Mood Dragons are long, sinuous hunting dragons that can change color based on their moods. They are four-legged with a pair of long, elegant wings. Mood Dragons also have a single antennae of sorts in the middle of their head that can move forward and backwards. Their eggs will change color as well. There is a wide variation in size, from the size of a spaniel to as big as a lioness.

Mood Dragons are able to change colors based on mood.

Note that Camicazi's Stormfly is capable of speaking Norse, in addition to Dragonese, which indicates a high level of intelligence.

The Dragon Key in The Incomplete Book of Dragons indicates that Mood Dragons also have X-ray vision.

A Mood Dragon's color changes according to its mood. For example: Camicazi's Stormfly turns a violet color when she lies. An angry Mood Dragon turns a deep blue-black, an excited Mood Dragon turns orangey-pink, and nervousness is a very pale green. When they get very angry, they tend to swell up. They are not particularly vicious unless angered, but are generally self-centered and manipulative.

Mood Dragons sided with the Humans in the Dragon Rebellion.

The hunting dragon of Camicazi, a Mood Dragon named Stormfly, makes her debut in this book. Toothless is very smitten with her.

Stormfly appears briefly at the end of this book, having been rescued from capture by Camicazi.

Information about the Mood Dragon species is discussed in this reference book, as well as appearing in the Dragon Key at the back of the book. 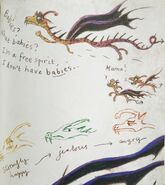