How to Train Your Dragon Wiki
Register
Don't have an account?
Sign In
Advertisement
in: Dragons, Dragon Species from the Books, Bog Dragon Class,
and 10 more

The Monstrous Nightmare is a dragon seen throughout the How to Train Your Dragon book series.

Monstrous Nightmares are styled rather devilishly, with two curved horns on their heads, and physically resemble a western-style dragon.

Nightmares vary in size, but can be the largest of the hunting dragons. They are rated as Size 3 in The Incomplete Book of Dragons, placing them in the same size category as small Riding Dragons such as the Chickenpoxer or Zebramount.

To note: The Incomplete Book of Dragons and the "Viking Dragons and Their Eggs" Info Page in How to Train Your Dragon give different stat numbers.

Monstrous Nightmares have excellent senses - eyesight, smell, and hearing. This makes them excellent hunters. They are intelligent and can speak Dragonese, as well as be rather devious. They have retractable claws and capable of breathing fire, making them one of the hardest and deadliest to train.

Monstrous Nightmares are portrayed as rather selfish, vicious, and sly. They will immediately desert their master and flee for their lives when in danger, often leaving the humans defenceless to any oncoming threat.

Evidently there is some intra-species prejudice amongst Monstrous Nightmares. Though Fireworm and Killer dislike each other, Fireworm throws out a judgmental slur about Killer's lineage.

Interesting to note, Monstrous Nightmares sided against humans during the Dragon Rebellion, abandoning their masters, as noted in The Incomplete Book of Dragons and How to Fight a Dragon's Fury.

By unofficial Viking law, only the chief, or the son of the chief, can own one. Despite this, Snotface Snotlout, the nephew of the chief, acquires one named Fireworm, while Thuggory the son's chief from the Meathead Tribe owns another named "Killer".

Stoick the Vast has two hunting dragons, one a Gronckle named Newtsbreath and a Monstrous Nightmare named — interestingly — Hookfang.

The individual Monstrous Nightmare, Fireworm, is briefly mentioned in this book. However, Nightmares in general are mentioned as well, as a food item for the Romans, particularly the Fat Consul.

Monstrous Nightmares appear in this reference book and in the 'Dragon Key' table at the back of the book.

In the final book of the series, Nightmares are listed as one of the species that fought alongside Furious in the Dragon Rebellion. 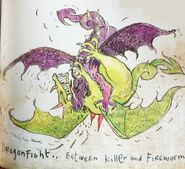 Monstrous Nightmares mentioned on a menu