How to Train Your Dragon Wiki
Register
Don't have an account?
Sign In
Advertisement
in: Tactical Dragons, Dragons: Titan Uprising, Dragons,
and 9 more

Mob-Clobber is a male Hushboggle appearing in the game, Dragons: Titan Uprising.

Mob-Clobber is dark green and light green, with faint shades of blue on his wings. He has red claws and spikes on his head and back and a red nasal horn. The tip of his tail is red and white. He has white eyes without pupils. 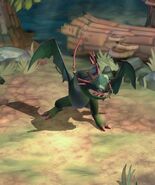