How to Train Your Dragon Wiki
Register
Don't have an account?
Sign In
Advertisement
in: Plants, Gift of the Night Fury, School of Dragons,
and 2 more

Mistletoe is a plant that appeared briefly in the DreamWorks Dragons franchise.

Mistletoe is a hemiparasitic plant of the order Santalales. There are over 900 species, but the most common one is the European mistletoe (Viscum album). It has smooth-edged, oval, evergreen leaves borne in pairs along the woody stem, and waxy, white berries that grow in clusters of two to six.

Mistletoe grows on trees, having the aspect of a shrub. They absorb water and nutrients from the host plant through a structure called haustorium. They also perform photosynthesis, but for a short period of time.

In Norse mythology, the god Loki uses a mistletoe arrow to kill Balder, due to it being his only weakness. In several pre-Christian cultures including ancient Greece and Celt, mistletoe is seen as a symbol of male virility.

In a deleted scene, Astrid makes up a new tradition similar to the mistletoe, dubbing it "Missing Toe", in which she strings up a severed toe to the corner of one of the village house's roofs, and punches everyone who walks under it.

Hiccup appears to be wearing a crown of mistletoe around his head during his wedding to Astrid at the finale of this film. This is mirrored in the ancient belief that the plant aids in male virility.

Mistletoe is briefly mentioned in a stable quest as a decoration for Snoggletog.

Mistletoe is briefly mentioned in the description of the Deadly Nadder New Years Stormfly. 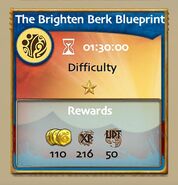