In Dragons: Riders of Berk, Mildew's Misery looks like an ordinary Scauldron, being sea green. Dragons: Rise of Berk, however, states that eating too much Blue Oleander causes a Scauldron's skin to change color to sea blue.

In the episode "Dragon Flower", the dragons of Berk are getting sick because of the Blue Oleander Mildew planted. Fishlegs states that the only cure is Scauldron venom, so they go search for one, luring it with Blue Oleander. Mildew's Misery appears and fights with the Vikings. He bites Mildew's rear end to get a flower and then swims away. Gobber manages to extract the venom from Mildew and save the dragons.

This Scauldron's name was first revealed in the game along with the fact that Blue Oleander causes a color change in Scauldrons. 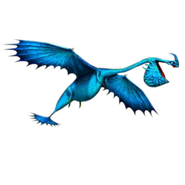 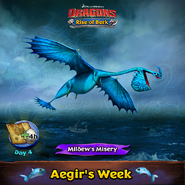 Retrieved from "https://howtotrainyourdragon.fandom.com/wiki/Mildew%27s_Misery?oldid=530999"
Community content is available under CC-BY-SA unless otherwise noted.