Mik is a character introduced in The Serpent's Heir and the current King of Nepenthe.

How Mik became King of Nepenthe, prior to the events of The Serpent's Heir, is unclear. The status of his father, the former King, is unknown.

Calder, acting as an emissary for Nepenthe, brings back Hiccup and company to Nepenthe. Mik takes on a casual greeting, instead of a more formal one. He offers Nepenthe's hospitality of hot springs and abundant food, without really getting into the problem at hand - tremors and mysterious dragon roar on the island.

It is not shown what happened to Mik between the time he was poisoned and the Foreverwing dragons leaving. With some of the island intact and the people of Nepenthe mostly safe, Mik must now actually lead his people. Hiccup hands him a shovel to start, though Mik does not know what it is at first.

Mik is a friendly young man and very laid back, to the point he would prefer to just be called "Mik" rather than King, Mikkel the Munificent, or even Mikkel. However, his laid-back demeanor highlights his lack of responsibility to his people and his island, instead letting others like Calder run the government. Based on the fact that he doesn't know what a shovel is, he most likely never had to actually work in his lifetime, and could be considered lazy. However, it may be a product of his upbringing and the effects of Foreverwing breath. Despite not knowing what a shovel is, he does appear to jump right in and start digging a hole in the sand, indicating that he may be starting to take ruling Nepenthe seriously.

Mik's father is only mentioned in The Serpent's Heir. Both had the same exact same name and titles. It is unclear if his father was "the First" and Mik "the Second", or if the title Mikkel the Munificent is applied to a much longer line of succession. Mik does not appear saddened in the least when mentioning his father, suggesting they may not have been that close.

Calder may also be a relation to Mik, though it was never specified in the graphic novel. However, Calder's apparent high position in Nepenthe's government and his physical appearance being similar to Mik's suggests there may be a familial connection. 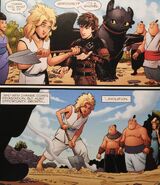