Merciful Nightmares are a group of Monstrous Nightmares appearing in the game, Dragons: Titan Uprising.

Merciful Nightmares are mainly blue with yellow eyes, underbellies, and wings, much like typical Monstrous Nightmares. Their long horns, spines, and claws are black. A faint turquoise hue is blended with the same coloration of their bodies on their snouts. Their tongues are light blue, instead of the normal pink. 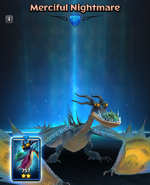 Retrieved from "https://howtotrainyourdragon.fandom.com/wiki/Merciful_Nightmare?oldid=433972"
Community content is available under CC-BY-SA unless otherwise noted.