How to Train Your Dragon Wiki
Register
Don't have an account?
Sign In
Advertisement
in: Dragons: Rise of Berk, Dragons, Dragon Hybrids and Subspecies,
and 9 more

The Melting Wing looks similar to the Changewing. This Changewing, however, has a light green body, a stark contrast to a regular Changewings' bright red coloration. Melting Wings possess five bright magenta pink stripes along their wings and the spikes on their back, feet and horns are pink in color. These colors match the color of growing plants and blooming flowers in Spring, where they appear. 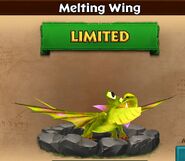