How to Train Your Dragon Wiki
Register
Don't have an account?
Sign In
Advertisement
in: Objects, Franchise Objects, Hiccup's Gear (Franchise), Weapons

Take down several enemies from afar

The Megapult is a wooden crossbow with two layers of limbs, which are reinforced with metal. There are ten arrows nocked simultaneously on it and the trigger appears to be constructed from a set of gears.

The Megapult possesses a much greater capacity than a regular crossbow, being able to fire up to ten spikes at once.

During the events of "Dangers of the Deep", Hiccup invents this device while shirking his duty as acting chief. Mildew walks in on him to complain about the dragons, but Hiccup comments that unless he is interested in the Megapult, he should go. Later, he uses it against the Outcasts and taunts Alvin. 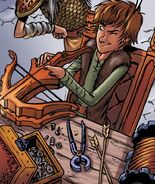