Meet the New Dragons is a book related to How to Train Your Dragon: The Hidden World. It was released on January 29, 2019.

Hiccup Haddock introduces himself to the reader, saying that he is the first Viking to ever befriend a Night Fury. He then tells the reader how each of his friends paired with a dragon of their own: Astrid Hofferson with Stormfly, Fishlegs Ingerman with Meatlug, Snotlout Jorgenson with Hookfang, and Ruffnut and Tuffnut Thorston with Barf and Belch. Hiccup proudly states that all Vikings of Berk accepted dragons as their friends, making the island the first Dragon-Viking utopia. Hiccup explains that Viking started to study dragons and discover new species, to the point where they believed they saw them all. However, they were mistaken, with Hiccup telling the reader that the newest discoveries were the Crimson Goregutter and Hobgobbler, which the Dragon Riders encountered during a mission. Hiccup explains that some people outside Berk still hunted and killed dragons, such as the feared Grimmel the Grisly. The hunter uses his own dragons, the Deathgrippers, which had venom strong enough to either calm or kill a dragon. In order to capture Toothless, Grimmel uses a female Light Fury as bait, but the plan fails, and the two dragons start to bond. Hiccup then explains the Light Fury's ability to become invisible. With Grimmel knowing the location of Berk, Hiccup decided to leave the island and search for the Hidden World, the legendary home of all dragons. Hiccup soon found out that the Light Fury was following them, so he made a new tail fin for Toothless, in order for him to fly on his own. The Light Fury took Toothless to the Hidden World, and Hiccup and Astrid followed them there. Hiccup then realised that Vikings and Dragons had to part ways in order for them to live in peace. Years later, Hiccup visited the Hidden World and found out that Toothless had three babies called Night Lights. 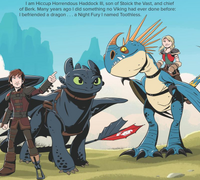 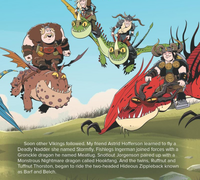 Retrieved from "https://howtotrainyourdragon.fandom.com/wiki/Meet_the_New_Dragons?oldid=777405"
Community content is available under CC-BY-SA unless otherwise noted.