How to Train Your Dragon Wiki
Register
Don't have an account?
Sign In
Advertisement
in: Objects, Franchise Objects, School of Dragons

Several Mechanical Grimoras were created to stand inside the maze in Loki's Maze of Mayhem. They were placed at dead ends in the maze. When the player walked too close to one, it would emit a loud shriek and flap its wings in an attempt to scare the player.

Use in a Maze

During the construction of Loki's Maze of Mayhem, Ruffnut and Tuffnut stationed several Mechanical Grimoras inside the maze section. One was placed at the start of the maze as an example for the player, while the rest were placed inside the maze at various dead ends. If the player walked too close to one, it would let out a loud shriek and flap its wings in an attempt to scare the player. If the player managed to avoid the Mechanical Grimoras in the dead ends and finish the maze, they would proceed to the next room.

A ring of Mechanical Grimoras was places around the prize chest at the end of the maze during the 2020 Fright of Passage. 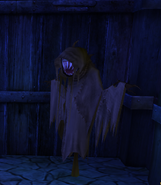