Marsai Martin is an American actress who voices Aggro in the series, Dragons: Rescue Riders.

Marsai Martin was born in Little Elm, Texas. While taking portrait photographs, the photographer suggested that her parents submit the photos to talent agencies. She quickly landed a role in an ad for Choice Hotels at the age of five. By about the age of eight years, her family decided to work on Marsai's career by moving to Los Angeles, California. From there Marsai's career is growing with a major role in the TV show Black-ish.

Marsai Martin has already won several awards in her young career, including her 2016 wins for the Young Artist Awards "Best Performance in a TV Series - Supporting Young Actress" and the NAACP Image Award for "Outstanding Performance by a Youth", both for her work on Black-ish. She also won a Kidscreen Award for "Best Acting" for her role in An American Girl Story – Melody 1963: Love Has to Win in 2018, as well as three additional NAACP Images awards for Black-ish. Marsai Martin also played young Jordan Sanders in the 2019 film Little. 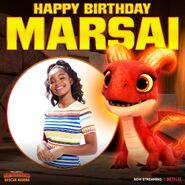