Leader of the Dragonroot Company (Formerly)

Maeve is the leader of the Dragonroot Company and the main villain of the game, Dragons: Titan Uprising.

Forming a bond with Dragons

After her family was killed by a group of wild dragons, Maeve swore she would either rid the world of dragons, or to die in the effort. Her campaign of retribution took its first victim in the form of an abandoned Buffalord nest full of eggs. She began smashing the eggs, but before she could destroy them all, one of them hatched. When Maeve raised her sword to finish her mission, she ultimately found herself unable to kill the dragon. The baby looking up at her from its shell reminded her of her own lost child. She took the little Buffalord under her care, and doing so, she became the Matron of Dragons. Her Buffalord helped her climb the ranks of the Dragonroot Company to become the ruler she was destined to be, and played a vital role in her plans to conquer the Archipelago.

Encounter with Fishlegs and Hiccup

While investigating the cause of the apparition of dragon hybrids, Fishlegs crossed paths with Maeve. Suspicious of her, Fishlegs asked the woman who she was and if she happened to know about the dragon hybrids. Maeve quickly flew away on her Buffalord, without answering the questions. Fishlegs followed her, but accidentally stumbled upon Guardian of the Forest. He was then forced to fight the dragon, while Maeve managed to escape.

Disrupting the Dragonroot Company, and leaving the Archipelago

After defeating the Alphas poisoned by the Dragonroot Company had become a weekly deed, it came to the attention of both the Riders and the villains that Maeve had seemingly developed a soft-spot for Hiccup, much akin to Viggo Grimborn. Eventually, Savage began conspiring that Maeve was hiding something from her people. After Maeve willingly dropped hints for the Riders about how to create a cure for the Dragonroot poison, the Generals started believing Savage, except for Fuld, who refused to believe Maeve could betray them. As Maeve kept sympathizing with Hiccup and giving clues to the Riders, Hiccup sensed the "good" in Maeve, and eventually convinced her to join the Riders and find an antidote for the poison. With Maeve now on their side, the Riders fought against the company more efficiently, while conflict ensued among the Generals regarding who should take Maeve's place. They ultimately split the empire, with each General having his own region. After the final battle, where the Dragonfroot Company was broken up for good, Maeve claimed the Generals would keep themselves busy, as well as keeping Berk busy enough to not be able to chase her down. She revealed that it was her plan to dismantle the Dragonroot Company, as she had made all the gold she could in that area, and was planning on moving out of the Archipelago. The Riders encountered Maeve one more time, after Astrid convinced Hiccup to go after her. She expresse her hopes of seeing Hiccup again in the future.

Maeve is a tall, slender woman with a pointed chin, a small nose, and a long, but thick mouth. She has long, auburn hair, tied in a single braid, with purple extensions. She has blue, oval eyes and thick eyebrows. She has purple scar-shaped war paint on her right eye.

Maeve wears a black dragon scale armor with blue highlights. She has a dark brown belt with metal pinned to it. She has two large shoulder pads with spikes that are black and purple. She wears a dark cape with a hoodie attached to it. She has a large necklace with many teeth on it, presumably dragon teeth. She wears a simple brown kransen on her forehead. 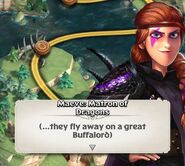 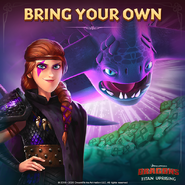 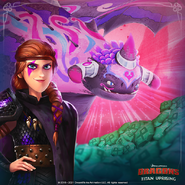