Madalyn "Maddy"[1] Gonzalez is an American actress. She voices Zephyr Haddock in How to Train Your Dragon: Homecoming.

Madalyn was born in southern California to her parents David and Joanna Gonzalez. She has provided voice work for many radio ads and television commercials. Her first known acting role was for an unreleased Life Bros Entertainment short Conveyance when she was six. She later attended a "Summertime Christmas" event in Riverside, California in 2016 where she landed a minor role in the low budget holiday short Tiny Santa as one of many children who played themselves. Homecoming is her first major production. She may have secured her part in Homecoming as early March of 2018[1].

She comes from Mexican heritage and has a younger brother named Quin. 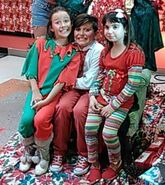 Madalyn on the right