How to Train Your Dragon Wiki
Register
Don't have an account?
Sign In
Advertisement
in: Dragons, Dragon Species from the Books, Bog Dragon Class,
and 4 more

Long-Eared Caretaker Dragons are a dragon species mentioned in How to Seize a Dragon's Jewel and detailed in the reference book, The Incomplete Book of Dragons.

Caretaker Dragons have long floppy, cavernous ears, giving the appearance of a basset hound or lop-eared rabbit. These ears do serve a purpose, though. Caretaker Dragon pairs raise and parent their eggs and offspring (unlike some dragon species). After laying several speckled eggs, the female will place the eggs in the folds of her mate's ears, where the eggs will remain warm and dry until hatching. After hatching, the baby Caretaker Dragons will still use their parent's ears for shelter and protection.

Because of the Long-Eared Caretaker Dragon's strong parental instinct and docile nature, they are used to watch over human infants and children, as was the case with orphan Fishlegs.

Caretaker Dragons are used by Vikings as cart dragons, babysitters, and children's guard dragons. They rate a Disobedience factor of "1", meaning they are very easily trained.

A Caretaker Dragon is mentioned as raising Fishlegs on Berk.

This reference book details some of the biology of the Long-Eared Caretaker Dragon. 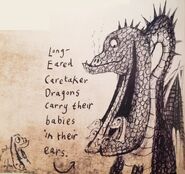 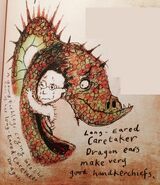 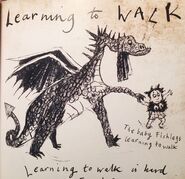