Litter Sitter is a mini-comic which comes along with the third volume of the Riders of Berk Comics, "The Ice Castle".

Snotlout is carried by Gobber, while asking why he should be punished. Gobber says that he is paying for the accident with Mildew's sheep and a catapult, and that he needs a volunteer to babysit some Monstrous Nightmares. He states that it could get messy and comments how the babies are already bonding with the boy, then leaves. Snotlout accepts with one condition: the dragons will follow his terms.

Later, Snotlout goes out with the babies in a line, teaching them discipline. When Hiccup asks him who is he talking to, Snotlout realizes that the Nightmare were on the loose. One steals with a man's sheep, another eats a women's mole pie, two play with some clothes and one is burning a man's foot.

At the academy, Snotlout tells Hookfang to teach the babies how to behave and show them how he respects him. Instead, the Monstrous Nightmare fires at him. Outside, Stoick and Gobber discuss about the preparation for Freya's Day when Snotlout runs away the babies on fire. Not caring, the two walk away, continuing talking. Snotlout ends up in a barrel of water, understanding that the babies just wanted to play.

Later that day, Snotlout counts the dragons while they sleep. However he only counts eleven. He then counts them by their names, Brisket, Saddle, Chuck, Rump, Loin, Scrag, Cutlet, Ham Hock, Sausages, Offal and Knuckle, noticing that Pot Roast is missing. He runs through the village, searching for him and finally finds him at the edge of cliff, preparing to fly. Snotlout catches him just in time, telling him to wait until he's older.

Meanwhile, the other riders wonder why Snotlout didn't join them. Fishlegs states that he wasn't at him home. However, Hiccup finds him sleeping with the babies, telling them not to let on Snotlout that they know. 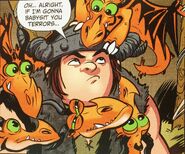 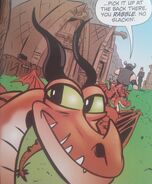 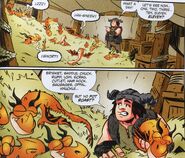 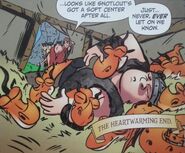 Retrieved from "https://howtotrainyourdragon.fandom.com/wiki/Litter_Sitter?oldid=382211"
Community content is available under CC-BY-SA unless otherwise noted.