For a variety of reasons, scenes are deleted from movies. Whatever that reason, the scene was good enough to advance from the writers to the actors to the cameras. At many times, these scenes give a more detailed exposition of a plot point. The following is a list of the deleted scenes from the movies and special:

Takes place after Stoick tells him that he's not a dragon killer. It shows Hiccup working in Gobber's blacksmith shop, talking with Gobber about his relationship with his father then Gobber changes the subject and teases Hiccup about his crush on Astrid. Astrid then arrives to have her axe sharpened and Hiccup shows her some of his designs and ideas for weapons.

Goodbye At The Docks

Hiccup sees his father off prior to going to dragon training. Their mutual awkwardness lands Gobber as an interpreter.

Takes place before Stoick speaks with Gobber about Hiccup's new popularity. Stoick is worried that they won't have enough food for the winter and how two ships were lost in the fog.

The pageant is performed in the Great Hall toward the beginning of the special. Some children are dressed as Viking warriors, while others are dressed as dragons. Gobber directs the pageant, but forgot to change the script to fit in how dragons were now a beneficial part of Viking life rather than enemies. So at the direction of one child who's declared to be Odin, the "dragons" and "warriors" fight and there's a lot of theatrical blood-shed, much to the horror of the audience. Stoick has to step in and discuss with the village how many of their holiday practices will need to be adjusted now that the dragons are their friends. Amusingly, they all realize how many of their holiday traditions involve violence toward dragons. The conversation is interrupted by the dragons suddenly starting their migration. The villagers sadly watch their new companions leave, except Hiccup because Toothless can't fly without him.

The scene begins with Hiccup sitting on a bluff, mulling over how to help Toothless, who is unable to fly by himself. As he watches Toothless sit at the other side of the cliff, Astrid approaches him and cheers him up with a goblet of Yaknog. As he receives the goblet, Astrid sits down beside him. The former remarks that he should be blamed for rendering Toothless unable to fly. He takes a sip of Yaknog and is evidently alarmed. He holds the drink in his mouth, struggling to swallow it but out of courtesy, refuses to spit it out. Astrid yammers on, claiming that the other Riders were jealous and advises him to cheer Toothless up by giving him a gift. Hiccup considers it, glancing at his dragon who is still looking forlornly over the ocean. Astrid punches him lightly and leaves. Hiccup immediately spits the yak of out and wipes his tongue with a clump of grass. Toothless hops over and begins eating the leftover Yaknog on the ground, enjoying it. Hiccup groans in disgust, though his eyes wander to his dragon's tail. 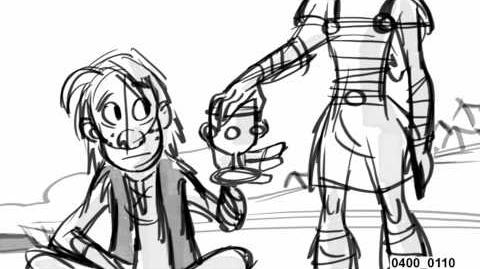 This sequence takes place in between the scene where Toothless leaves Hiccup and when Hiccup wakes up the next day. It starts with Toothless soaring solo with his new auto-tail fin, far off the borders of Berk. Hiccup watches him at a distance and with a shaky breath, calls out his name. Almost immediately, the dragon returns but as Hiccup reaches out, Toothless disintegrates into a wisp of air. Hiccup looks down at the ground, only to realize that it is hovering over the ocean and is about to fall. Instantly, Hiccup wakes up from his bad dream.

This scene was cut out due to time. 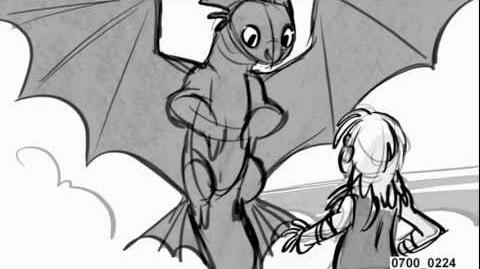 The scene begins with Hiccup walking through the village, when Astrid suddenly steps up and punches him. She remarks that he had stepped under the "missing toe" (mistletoe). She reveals a severed toe dangling by a string above him. Snotlout and the twins arrive, the former remarking that it was a stupid new tradition Astrid had came up with. The twins, sporting black eyes and bruises from Astrid's punches, explain the rules -- step under the missing toe and get punched in the face. Bitterly, Hiccup mutters that it isn't a 'classic tradition', while Snotlout claims it's better than Yaknog. And Astrid asks if they wanted more. Hiccup quickly leaves, and the scene continues with the present one where he bumps into Fishlegs. 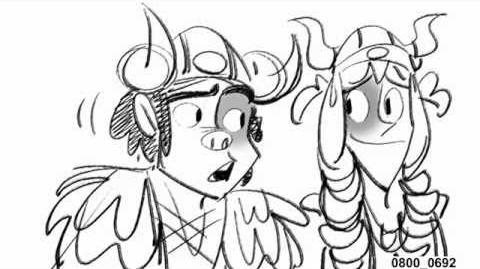 Gobber approaches Stoick, who is busy clearing a flock of sheep by tossing them back into their pen. The chief cheerfully asks if Gobber wanted to lend him a 'hand', seemingly pleased at his pun. The other Viking simply shrugs it off, remarking that he probably spent the whole day thinking about that joke and that Stoick was lucky that he could spare his one hand to help. Gobber then casually recounts that Hiccup had nearly lost the former's good arm on a bucking Gronckle and had taken off.

Enraged, Stoick yells that he had disobeyed his orders not to go after the dragons. Gobber questions if he was really upset merely because of Hiccup's little rebellion or if there was something deeper. The other Viking insists otherwise. With his well-known parenting advice, Gobber reminds Stoick that even though Hiccup was becoming his own man, it does not mean that he was no longer his son. Stoick tosses the last of his sheep and hesitates, before confessing that he hoped that running the village was something they could do together. 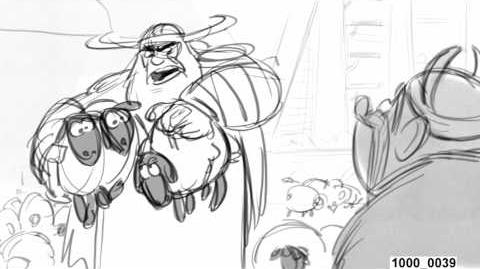 Takes place before the beginning of the film. It shows Valka, Cloudjumper, and her Bewilderbeast rescuing dragons from Eret's fort. It shows the attack in which Hiccup and Astrid investigate later on.

This scene shows Fishlegs and Snotlout presenting Ruffnut gifts such as a Terrible Terror and commenting on her sixth toe, much to Tuffnut's amusement.

Hiccup attempts to show Eret how he will convince Drago and change his mind about dragons. Takes place before Hiccup is "rescued" by Snotlout and Hookfang.

In the extended version of 'Itchy Armpit', Astrid hugs Hiccup from behind and they cuddle.

An alternate version of the 'Itchy Armpit' scene animated by Jacob Jensen.

An extended version of Hiccup training with Valka, where there is a scene in which Valka tries using Stormcutter (Cloudjumper's) saliva to power his dragon blade, which proved to be a little too powerful for Hiccup's taste.

An extended version of Stoick's funeral where Astrid comforts Hiccup.

Start of a Battle

In "King of Dragons, Part 2", after Hiccup and Toothless go in the caves of Berserker Island to find the King of Dragons, Astrid takes lead of the Dragon Riders, including Heather and Dagur the Deranged. As they charge towards the Dragon Hunter fleet, the dragons become disoriented due to the King of Dragons' presence and almost crash into the Berserker village. Mala feeds each dragon a Sagefruit, before Astrid forms a plan of attack.

The animation was partially finished in this scene with little dialogue. It shows Hiccup melting metal and forging multiple pieces of the "'New' New Tail", and assembling them. Toothless checks in on the progress occasionally, getting in the way, until the scene ends with a functional auto-tail.

Hiccup builds a tent for Toothless on New Berk to bring the Light Fury to where they can have some privacy. It includes a bed of coals for warmth and fireflies for light. While he's finishing up showing Toothless around, Valka returns from a scouting mission with Eret to declare that Berk had been burned to the ground. She goes on to warn Hiccup that it might be safer for everyone if he lets the dragons go free, but Hiccup insists there's still a way for them all to live in harmony and safe from Dragon Trappers. In the intro, Dean explains that it was cut because it felt out of character for Hiccup, however some of Valka's dialogue was absorbed in scenes that duds make the cut.

Valka and Astrid are on a spy mission to check on their former island and taking about a possible wedding between Hiccup and Astrid on the bar future. Astrid says that she can't compete with Toothless for Hiccup's attention and dependence. So she asks Valka how the marriage between her and Stoick came to be, to which Valka explains that Hiccup takes after her in being the flighty one in the relationship. They suddenly come upon Berk and see that Grimmel and the Warlords burnt the entire village to the ground.

Mind Before the Sword

Stoick and Hiccup are playing a board game in their house while Hiccup is a child. At first it appears Hiccup has won, but Stoick reminds him of a weakness that he had forgotten about, resulting in Stoick winning. Hiccup pouts and drops his game piece to the floor, leading to Stoick letting Hiccup win after all, and explaining that he needs to be careful and think before he acts.

Another flashback with Hiccup and Stoick walking through the woods, and Hiccup slashing at trees and bushes with his wooden sword, pretending he's killing dragons. He suddenly comes upon a baby bird on the ground who's unable to fly and asks his father what's wrong with it. Stoick sadly exclaims that it's fallen from its nest and broke its wing, so the kindest thing to do is put it out of its misery. He orders Hiccup to go a head on the trail so the child won't have to witness the bird's death, but Hiccup starts crying and begs Stoick to spare its life because it's little and helpless. Stoick softens his expression and tells Hiccup to fetch a small twig. He then pulls a hair from his beard and uses it to secure the twig to the baby bird's wing. With Hiccup gently holding the bird in his hands, Stoick tells his son that the bird is now his responsibility. 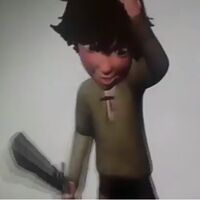 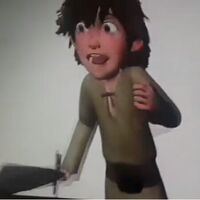 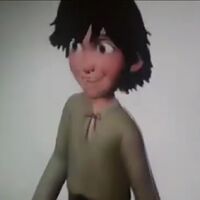 When Dart, Pouncer, and Ruffrunner arrive on New Berk, they start exploring the human village. They slide on the snow on a piece of metal before hitting a Viking house, which results in a large pile of snow falling on their heads. One of the juveniles licks an iced stick and its tongue remains stuck on it. The other two Night Lights attept to free their sibling, but fail. The stuck dragon fires a small blast on the ice, which frees its tongue. Next, another hatchling finds a wheelbarrow full of apples and attempts to eat one, but spits it out immediately due to its bad taste. One of the other Night Lights ends up wearing a Viking helmet and the three hatchling move on onto their next adventure.