Lil Lullaby is an adolescent male Thunderdrum who first appeared in "Imperfect Harmony".

Trapped by a Death Song

At some point before the Dragon Riders arrived on Melody Island in "Imperfect Harmony", Lil Lullaby was captured by a Death Song and encased in amber. Earsplitter escaped, although he would not leave the island until he had rescued his son.

After freeing the rest of the Riders, their dragons, and Toothless, the gang were about to leave, when Hiccup noticed the infant stuck in a block of amber, which was why Earsplitter was still on the island. While Hiccup distracted the Death Song, the rest of the group freed the baby Thunderdrum from the amber.

In the skies over Melody Island, Earsplitter and his son had a touching reunion. Hiccup warned them to leave the island as soon as possible, but Tuffnut pointed out that the Thunderdrum pair couldn't hear him, as they have very bad hearing.

Lil Lullaby appears similar to other adolescent Thunderdrums, such as Bing, Bam, and Boom. He is blue in color, similar to Bam and Thornado, though he has a slightly lighter, paler blue color than both. 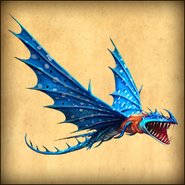 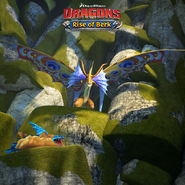 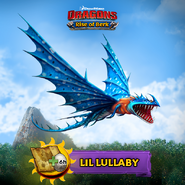 Retrieved from "https://howtotrainyourdragon.fandom.com/wiki/Lil_Lullaby?oldid=535971"
Community content is available under CC-BY-SA unless otherwise noted.