Liam O'Brien started to study acting in high School, then studies at New York University Tisch School of the Arts. From there he partook of many theater productions around the U.S. He later became involved in voice acting, writing, and voice directing.

He is married to Amy Kincaid and has two children - one daughter and one son.

Liam O'Brien has voiced a multitude of characters over the years from Anime, Video Games, and other works. 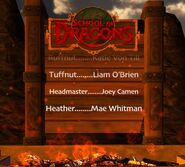