How to Train Your Dragon Wiki
Register
Don't have an account?
Sign In
Advertisement
in: Dragons, Dragon Species from the Books, Sea Dragon Class,
and 7 more

The Leviathorgan is a huge, ancient Sea-Dragon that usually lives in the northern polar oceans.This dragon is said to have been around since the time of the dinosaurs. Leviathorgans joined Furious in the Dragon Rebellion during the Second Dragon War.

The Leviathorgan is a long-lived, giant Sea Dragon larger than any human ship. They clearly stay sedentary quite often, perhaps sleeping, as their hides are often black with barnacles and other fixed crustaceans, as well as coral and seaweed.

The Incomplete Book of Dragons notes that Leviathorgans have excellent hearing, and also that they can have multiple heads.

One of the Leviathorgan's signature features is the ability to shoot hard bony projectiles from their fire holes (in their mouths) at great speed. They are described as "stings" and can be as long as a spear. Each sting contains a red-black poison that releases from the leading tip. If the sting itself doesn't kill you outright, the poison will.

Another less physical trait Leviathorgans have is their long memory, specifically for wrongs committed against them. The individual Leviathorgan featured in How to Ride a Dragon's Storm traveled across the Atlantic Ocean into warmer waters to follow Hiccup and exact revenge because he accidentally woke him up.

The Leviathorgan is detailed in this reference book, as well as in the Dragon Key at the back of the book. 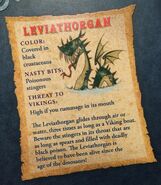